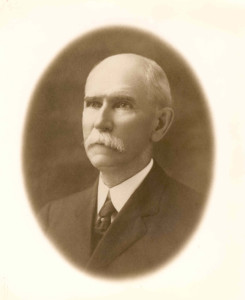 How are you related to East Lynn Farm’s founder, Major Bushrod Washington Lynn?

He is my great, great grandfather.  Bushrod Lynn had a daughter named Isabella Virlinda Lynn (her nick name was Belle).  She married a pharmacist named Leonard Temple Marston.  They had a daughter named Dorothy Marston who married James Kay.  They had two children, Loraine Kay and James Arthur Kay Jr.  James Arthur Kay Jr. was my father.  The family photo below shows Bushrod Lynn holding my grandmother, Dorothy Marston. When did you become aware of your connection to Bushrod Lynn?

I have always been aware of it from as early as I can remember.  Bushrod Lynn is buried in Hollywood Cemetery, a beautiful garden cemetery in Richmond overlooking the James River.  As a child, my father and grandmother would take me there several times a year.  I used to romp around looking at all of the headstones, trying to find the oldest one. In addition to Bushrod Lynn, there are many other famous people buried in Hollywood Cemetery, including Jefferson Davis and former presidents John Tyler and James Monroe, both Virginians.  There is also an author named James Branch Cabell, who wrote 52 books, including comedies of manners about postbellum Richmond and works of genealogy.  One of his books,  The Majors and their Marriages, contains information about my family history.

What were some of the stories that your family passed down to you about your great-great grandfather?

I never met my great grandmother (Belle), so I don’t have any first-hand accounts.  We were always told that Bushrod Lynn fought in the Civil War and that, as head of the Virginia Penitentiary, he abolished chain gangs and took measures to avoid overcrowding.  Conditions at the Spring Street Prison, where he was the warden, were very bad.  We were told that Bushrod Lynn was asked to be the Governor of Virginia, but he had to decline because he was in poor health.  Towards the end of his life, he travelled to Los Angeles, where he passed away. (Here is a blog post summarizing what we know about Bushrod Lynn.)
Have you seen old family photos or letters from the time that Bushrod Lynn lived?

I have inherited a family bible with information on the births and deaths of some of Bushrod Lynn’s children. I also have Belle’s wedding ring and Bushrod Lynn’s gold watch.  It must have been very valuable at the time he lived!  Another family heirloom is an engraved locket with a piece of hair inside it.   I’m not sure whose hair it is—maybe it belonged to Belle, her husband, Leonard, or their daughter, Dorothy—my grandmother.

This antique Illinois Watch Co. “Bunn Special” pocket watch, believed to have belonged to Bushrod Lynn, was produced in 1896. The Library of Virginia in Richmond has lot of additional information about Bushrod Lynn, including correspondence when he was in the Civil War, when he served as a Virginia Senator, as well as personal correspondence, such as a postcard written to him from his daughter, Belle.

How do you ever visited East Lynn Farm to see the house that your ancestor built?

I have not, but I would love to see it some day!  I truly appreciate the care and restoration that the new owners have put into the homestead to preserve a piece of my family history.